The Origin of the Houses

The origins of the four Bream Bay College houses, Sutherland, Argyll, Ross, and Inverness, lie in events that started hundred of years ago in Scotland.

After invading England in an attempt to regain the throne for the House of Stuart, the Highland army of Bonnie Prince Charlie was defeated at the Battle of Culloden in 1746.  In revenge for the invasion, the English set out to destroy the Highland clan system.

The Government encouraged chiefs and landlords to evict clansmen from their ancestral homes and replace them with a more economical system of farming. This period was known as the ‘Highland Clearances’. Many of the clansmen and their families left Scotland for the Americas, searching for a better place to live.

Among the people of the Western Highlands at that time, arose an inspirational religious leader – Norman McLeod. In 1817, McLeod led 400 Gaelic speaking Highlanders across the Atlantic to Nova Scotia. Years later, looking for a better quality of life, McLeod and his followers sailed for New Zealand. In 1851, the first of these settlers landed in Waipu.

When Waipu District High School was established in 1939, a decision was made to divide the school into four houses. As a way of maintaining the link to the Western Highlands, the houses were named after four shires from that region; Sutherland, Argyll, Ross, and Inverness. The banners of the shires can be seen in the foyer of the Auditorium. In 1972, when Bream Bay College was established in Ruakaka, the Waipu District High School traditions transferred across to the new College. Among these traditions was the house system and the house names. Waipu Primary School, which remained at the Waipu site, also retains the same house system.

The black and gold cross represents the arms of the Campbell Dukes of Argyll, one of the oldest coats of arms in Scotland.
The winged claw holding the sword and crown represent the MacDonalds who were the rulers of the Western Isles.
The black galley with the flaming beacon represents the Lordship of Lorn. The waves represent the many sea lochs in the county
The five fish represent the fishing industry.

The yellow stars on the red background represents the arms of the ancient earldom of Sutherland.
The black raven on a silver background shows a link to the Vikings who settled in Orkney. 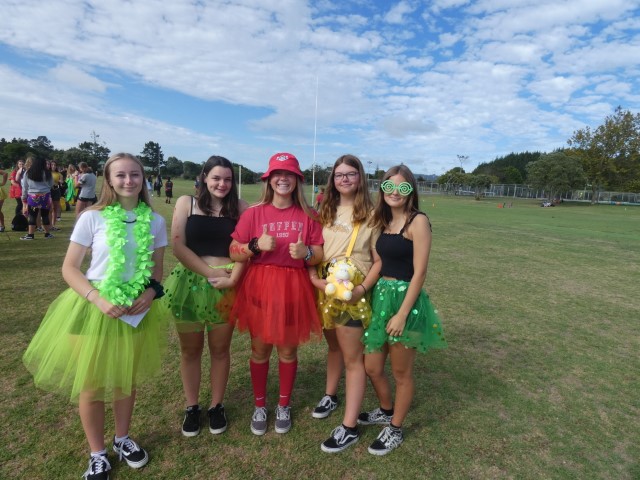